Ata is a dark-skinned adult man with white hair and two broken horns on his head. He has one dead eye, and wears a mask that conceals his mouth and chin. His attire consists of a sleeveless purple vest resembling a haori tied together by an armor plate covering his chest, along with dark baggy pants and sandals. He also carries four average katanas on his person.

Ata is a bloodthirsty and selfish samurai who abandoned his princess and betrayed Daruma. He seeks nothing but destruction and is focused on his mission. Ata is ruthless enough to wipe out planets without a second thought, and also extremely cunning. He is incredibly confident in his skills, and is willing to fight anyone. Even superior numbers do not scare him, but he is smart enough to know when an enemy is stronger than him. Despite being skilled and intelligent, Ata has proven to be impatient and overconfident, traits that sometimes must be reigned in by Niri.

Despite his destructive tendencies, he does have a sense of honor. He politely greets Daruma upon reuniting, and respectfully bows and asks for forgiveness over abandoning his responsibilities. Additionally, he believes that, above all else, a samurai should be courageous and strong, and he looks down at those who do not, deeming them samurai only in appearance but not in spirit, but he can still catch when an opponent is improving. Above all, Ata's loyalty to Kala is what drives his actions. He follows whatever orders Kala gives to the point that he would slay his subordinates without hesitation.[1]

Ata was once a student of Daruma, but betrayed him and the faction he serves for "selfish reasons" and became Kala's right-hand man.[2]

When Niri found the location of the eighth child, she relayed it to Ata.[3] To capture him, he used one of his Samurai Souls to create a copy that is dispatched to the coordinates supplied by Niri.[4] As the duplicate Ata was flying towards his destination, he passed some meteorite clouds, slashing them with ease for a shortcut.[5] Reaching Hachimaru's home planet, Ata crashed through the planet's moon, deciding to use it to aid in the elimination of the planet.[6]

Immediately after that, Ata was confronted by Karuraten, the Garuda Holder of Mujin, the protector of the planet. Ata quickly recognized Mujin and engaged him in battle. The fight went in his favor; Ata killed all the Samurai who were on Karuraten, Mujin's Princess, finished off Mujin. After destroying Mujin's Locker Ball, he went back to going after Hachimaru.[7] Upon locating Hachimaru himself, he launched an attack that was intercepted by Daruma, who was immobilized by the attack and greeted Dr. Furuta, asking him about Hachikaku.[8] After Daruma explained who Ata was, he realized he was in the presence of his old master and expressed respect towards him. In that moment before taking the Bloodsucker Samurai Soul from his master, claiming it belonged to Ususama school. Ata then bowed down and apologized for an incident involving Princess Baku, which brought painful memories to Daruma.

When Hachimaru spoke casually to Daruma, he got angry and scolded him for talking to his teacher that way, then recognized his target by his resemblance to the "the Seven".[9] As Ata was heading towards Hachimaru, he scolds him for having lofty dreams while still being weak, he effortlessly stops an attack from Hagamichi and turns his attention to Furuta. When Ata struck with his blade, Furuta activated his secret weapon, which Ata recognizes as an unfinished device meant to destroy Samurai Souls. The device stopped his attack, Ata was partially consumed by it before it gave out.[10] He recovers and attempts to defeat and retrieve Hachimaru. Hachimaru, however, eventually finds his resolve and fights back long enough for Daruma to recover and counterattack.[11] Ata is quickly pushed back, then defeated by Daruma's star-destroying move, Kongo-Yasha Style: Atmos Fangs.

Ata is an elite samurai, having earned the title of "Ata the Peerless." Fitting his title, he is nearly unstoppable in battle, easily defeating Mujin and all the samurai on the Karuraten without taking any noticeable damage, and it required the combined efforts of Daruma, Furuta, and Hachimaru to defeat even a replica of himself. [12] His ability was great enough that he was made Kala's right-hand man, and through this became strong enough to destroy planets himself. [13]

Ata has 5 Samurai Souls: one inside his body and 4 floating around him. He used one of these souls around him to create an Incarnate Body, but later replaced it. 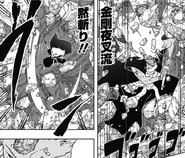 Retrieved from "https://samurai8.fandom.com/wiki/Ata?oldid=4484"
Community content is available under CC-BY-SA unless otherwise noted.