If a Bushi commits Seppuku and is accepted by Fudo Myo-o, their body will transform into two objects; a Soul (, Tamashii?) and a Key (, Kagi?).​ After that, the Key and the Soul are spontaneously assembled from the Locker Ball[1]​. The Locker Ball forms a new robotic body and a new Samurai is born with a Threefold Body.[2]

The Samurai Soul represents a rod that splits (つ, Tatsu?, lit. to cut off) objects in two, the opposite to a Samurai Key (の, Samurai no Kagi?) which represents a rope that binds (ぐ, Tsunagu?, lit. to tie/connect) one object to another.[3]

Some Samurai may have more Samurai Souls within themselves than their own like Ryu and Benkei while others have Souls around your body like Ata, Mujin and Future Hachimaru.[4][5]

Extracting and activating a Samurai Soul 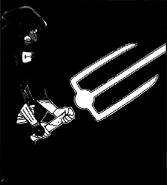 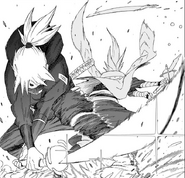 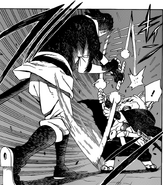 Ryu using his two Samurai Souls at once

Retrieved from "https://samurai8.fandom.com/wiki/Samurai_Soul?oldid=3380"
Community content is available under CC-BY-SA unless otherwise noted.